Visit our website at trokanski.org for more information about the companies, upcoming events, and how you can support our work .

Follow us on Tumblr for photos, contemporary dance memes, and short videos.

PTDT supports the Davis Dance for Parkinson's program. You can read more about Parkinson's Disease and resources in the Davis area on the Parkinsons of Davis Blog.

Subscribe to our newsletter to receive emailed newsletters directly from PTDT. Emails are sent approximately once a month.

So, back to the retrospectives!

I took a couple of weeks off, from writing these, to deal with this summer’s 2014 Repertory Concert and the PTDW’s two week Dance Intensive. Now, I’ve had two weeks without any teaching or performances to get ready for the upcoming season, and a great deal of it has been spent organizing files and looking back at the past. Apparently I have actually thrown very little away, it was just packed and stored in various boxes. Also…So exciting…We do have video of many of those earlier performances! (And, as I suspected, it has been pretty humbling to watch a lot of the early work.)

Board Member Linda Clevenger was hugely helpful with her idea to photograph the “ephemera” associated with each of the concerts… You have to love technology when it works! I now have programs, posters and some other photographs to share with you! 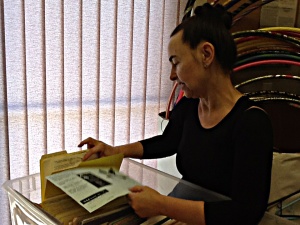 One of the most striking things, for me, is how very rudimentary the technology was then. Posters were cut and pasted, programs were typed on my long lasting college typewriter and copied at Kinkos. I have to wonder where the technology will be in another 30 years.

Here’s a poster and program from our first concert in Davis, February 1985, I Don’t Believe We’ve Met. Performing with my dancers and myself, were Greg Halloran who was teaching at the Dance Workshop at that time and running a jazz company called Flexed Feat. Another dancer who also taught ballet at the studio was Stephanie Hannapel. She had recently come from Puerto Rico, where she had danced in a company there.

View all posts by ptdtdw